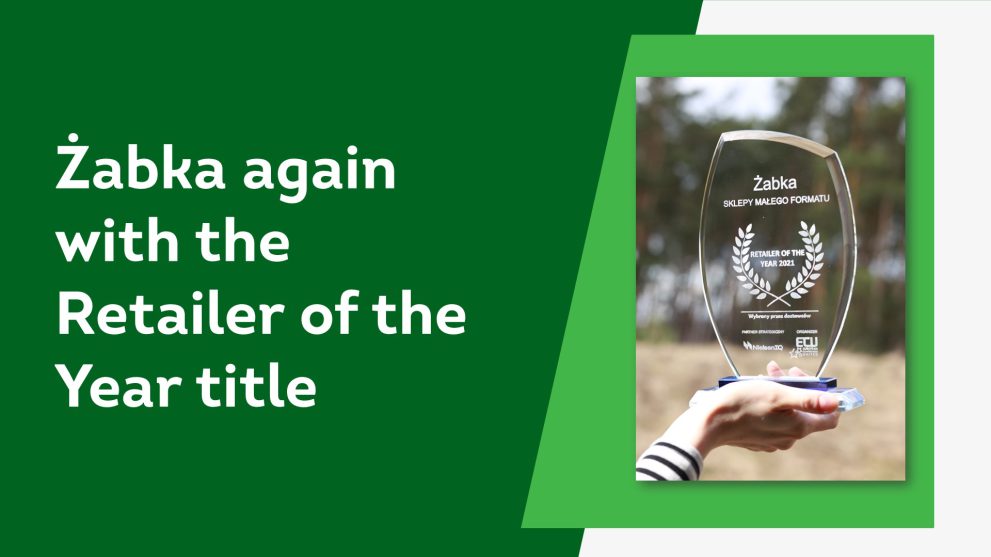 Żabka again with the Retailer of the Year title

What's up with us?

Żabka again with the Retailer of the Year title

Żabka was awarded the title of Retailer of the Year 2021 in the category of Small-format Stores. The award was presented during this year’s European Circular Retail Congress, on April 6 at the Hilton Double Tree Hotel in Warsaw. The awards given thanks to the votes of companies cooperating with chains – their suppliers, are of particular importance to Żabka – as they are an expression of trust and recognition for satisfactory cooperation. For the awarded company, receiving such a distinction is always a great honor.

Żabka has been awarded again the winner of the prestigious “Retailer of the Year – Selected by suppliers” competition for 2021. This is another prize in the Small-format Stores category awarded to the chain. The winners of this year’s edition were announced on April 6 in Warsaw. The award was received on behalf of Żabka by Adam Manikowski, Executive Vice-President, Managing Director of Żabka Polska.

The Retailer of the Year is a unique prize because it is awarded by suppliers. It is proof that suppliers consider the chain they have awarded to be a reliable partner and appreciate this cooperation. Awarding this prize to one chain many times is proof that it is worth cooperating with Żabka and it is the best possible recommendation for the chain from FMCG producers.

Żabka is a reliable partner

Żabka is the fastest growing modern convenience chain in Poland, currently with nearly 8200 stores across the country. Last year it opened 1100 new stores and has ambitions to make this year even better in terms of development. This would not have been possible without the chain’s employees, franchisees, and suppliers, many of whom have been working with the chain for many years, valuing it as a stable, reliable partner that has proven its value for years – even in difficult pandemic times.

Retailer of the Year

The “Retailer of the Year – Chosen by suppliers” award is the only distinction in the Polish market awarded to retail and wholesale chains by their suppliers. The prize is awarded in five categories: The main prize – the retail chain of the year, Multiformat networks, Supermarket, Discounts, Small-format stores, Wholesalers, and distributors.

In each edition, the “Retailer of the Year” prize is awarded based on research conducted by the renowned research company AC Nielsen.

We use cookies to ensure the proper functioning of service. We may also use our own cookies and those of our partners for analytical and marketing purposes, specifically to adjust advertising content to your preferences. The use of analytical, advertising and functional cookies requires consent. If you wish to accept all of the cookies, please click “Accept all”. If you do not agree to our use of the cookies other than those that are necessary, please click on “Reject all”. If you wish to change your consent, please click on “Manage cookies”. Please remember that each consent may be withdrawn at any time by changing the relevant preferences. For more information please see the Privacy policy.

Below you can manage your preferences for installing analytical and marketing cookies on your device in connection with the use of our website. You can also read the list of our Trusted Partners and find out what cookies are installed by individual entities.
For more information about the processing of personal data and about your rights, please see our Privacy policy. You can also read our partners list.

The files are used to compile statistics of visits and traffic sources on the website. They allow us to measure and improve the performance of the site. Thanks to these files we know how Users navigate the site, which parts of it are the most and which are the least popular.

The files can be used by our Trusted Partners to track Users on websites. The goal is to display ads tailored to the preferences of individual Users.

The files used for the proper operation of the website include, among others. the setting of preferences in terms of privacy, browser information, or player used (e.g. volume). You can set your browser to block this type of cookie or to display relevant notifications, but some parts of the site may not work.